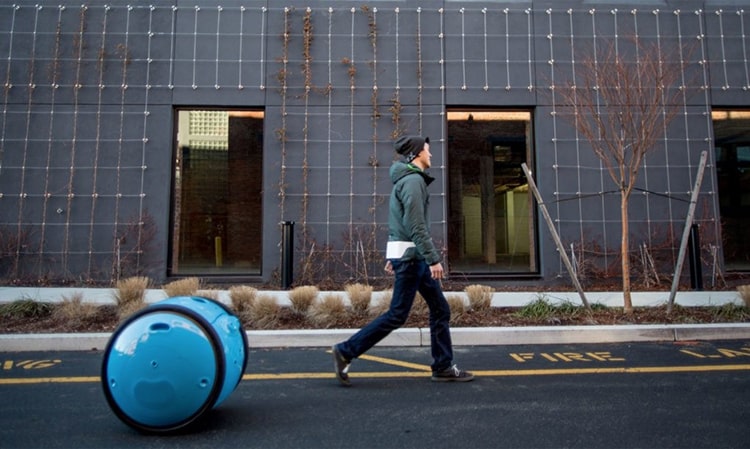 Piaggio is a name we all know for Vespa scooters and Moto Guzzi motorcycles. This Italian company has recently revealed its newest development – A personal delivery device or “cargo robot,” called the Gita. There is a new Startup within the Piaggio Group known as ‘Piaggio Fast Forward,’ in Boston. This group designed and developed the Robot and launched it in Feb’2017.

Piaggio is well-known for introducing the Vespa scooter in 1946. This Group is the largest European manufacturer of two-wheel motor vehicles. While the group has their headquarters in Italy, Piaggio Fast Forward Startup is in Boston, Massachusetts. Being a Startup initiative, you will see many freelance websites talking about it this month.

What is special about the Gita Robot?

Gita looks like an exercise ball or a very fat tyre and has multiple cameras embedded within its shell. It can either follow you or roll autonomously in an environment it has already mapped. It is 26 inches tall, and it can carry up to 40 pounds at a time. The maximum speed it can achieve is 22 miles per hour, meaning, it can keep up with a person on foot or riding a bike. It can run for about 8 hours of continuous use before it needs charging.

The Company has always made cycles, scooters and mini trucks for highly congested cities and on similar lines, they have created this small, lightweight cargo robot with a zero turning radius. The intention is people should move freely and leave the job of carrying weight to a robot.

How is this innovation different?

There are many Startups currently working on creating drones to take the pizza delivery through sky avoiding all traffic issues, but Piaggio Startup has taken a completely different approach for on-ground traffic and delivery issues. This Robot has to follow a human around to learn how to navigate around an unknown area. Its design allows it to go wherever a person in a wheelchair could go. It includes ADA-compliant ramps, elevators and grocery store aisles.

The Piaggio Officers gave some interviews to tech blogs in which they explained that the machine intelligent is important. The machine has to understand not to hit someone on the road while following the human. The importance of making ethical decisions is important for the robot. In case you are into Electronics, IoT or product making Startups, find freelancers to work on such innovative products which can get you to a completely different level with just one launch.

The Company Officers also explained that running Gita units indoors and out with select partners would help the company amass a database of location data that’s not available through currently available maps and other services. It could lead to better navigation tools to help people get around places like warehouses, campus buildings, airports, parking lots, and resorts. These are also places where the Gita could apparently ease workers and visitors from carrying a heavy load, whether that’s suitcases or tools. It is an assistant in any working environment where you always have to carry some luggage around.

If a place doesn’t allow a robot inside, Piaggio built the Gita to be able to park outside safely. It has a locking bay that requires a fingerprint scan and a code to open it, as well as start the robot. Gita has multiple camera and sensors, and it always knows it’s location.

In the next six months, Piaggio Fast Forward is planning to test Gita on different college campuses and in towns in the U.S. The company is not thinking only along the lines of delivering groceries, so much. It imagines the Gita assisting maintenance, gardening and custodial workers, and others who must cart heavy things around to get their jobs done on a given day, especially at resorts, senior living, and school campuses.

In a series of YouTube videos, Piaggio demonstrates some potential uses for Gita, including carrying groceries, picking up an order from a shop, assisting with stock at a warehouse, and even for walking a dog. On the landing page for this Robot, the company is asking visitors about their ideas to use this robot and other versions of it, trying to make a comprehensive list of all applications where Gita can be useful.

While it has some industrial applications, Piaggio is primarily positioning the robot as a personal mobility tool that frees people to ‘walk, run, pedal and skate through life’ without cargo. The idea is to help humans to extend their capabilities rather than replacing human workforce. The transportation and robotics industries tend to focus on optimizing tasks and displacing labor.

It is pronounced “jee-ta” meaning ‘short trip’ in Italian. The product description mentions it as having ‘a communicative personality’ and the ability to learn. It can navigate both indoors and outdoors. The company plans to test the product in some business environments, with an eye toward future consumer applications. The company has a mission to pioneer the intelligent movement of people and goods combining Piaggio’s expertise in lightweight mobility with new autonomous technologies.

The Gita models are cylinder-shaped with two rubber tread-like wheels at the outer edges. Each unit has a storage area enclosed between the wheels. Gita can roll up to 22 miles per hour, which is fast enough to keep up with a runner or a bicyclist. The Gita uses various cameras and sensors to navigate. The company states that the Gita has a battery life of eight hours and can get recharged in three hours. With these innovations, the readers can also think about the various possibilities of freelance jobs online! Gita is a useful robot to help you walk around freely and leave the luggage carrying work to the robot.

Previous post How to Get Your Startup Funded in 2017