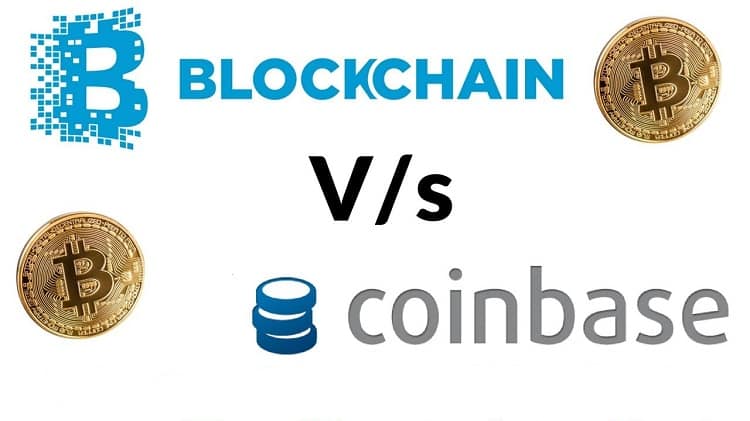 Bitcoin has been one of the most searched topics on the internet for the entire year of 2017. The exponential rise in the value of a Bitcoin has made it the most sought-after asset for a couple of years now. A bitcoin is a digital cryptocurrency and it does not have a physical form. To store any digital currency, you need a digital wallet and accordingly, there are various types of bitcoin wallets available across the world. Two of the most famous wallet services are Coinbase and Blockchain. What these wallets store is the private key that is associated with every bitcoin. You can use the bitcoins stored in these wallets to do online and even offline transactions wherever bitcoins are accepted. Let us understand the differences between these two wallets and find out which one is better for an individual.

What Is Coinbase Bitcoin?

By simple rule, any person who has the private key associated with a bitcoin, he is the owner of the bitcoin. Coinbase bitcoin service is like a bank where you can buy and deposit your bitcoins in the account created on Coinbase and they technically become the owner of the bitcoins. But you can withdraw them in local currencies or do various transactions using them anytime you want. What you get in return is a headache-free security service because they own you the bitcoins you deposited or whatever bitcoins you have in balance. The question may arise that since Coinbase technically owns the bitcoins, they can disappear with them anytime. But that is the same risk you take when you deposit your money in a private bank.

Before you can deposit, buy, sell and transact your bitcoin with Coinbase, it is important to do some background research to gain a trust factor. Coinbase was founded in July 2011 and it has its headquarters in California, US. Currently, it has its presence in 32 countries and there are about 13 million active users. They are not only providing service for bitcoin, they are extending the same for other cryptocurrencies like Ethereum and Litecoin. So far, $50 billion digital currencies have been exchanged. Coinbase app has been declared as the No.1 app in Apple App Store in terms of popularity and security on 9th December 2017. All these facts and figures should be enough to gain your trust. People have started to offer freelance jobs and do all the transactions in bitcoins thanks to Coinbase’s API integration with various freelancing platforms. But still, if you do not like the idea of someone else owning your bitcoin and there is no regulatory body to be responsible for your money in case the company goes bankrupt, Blockchain bitcoin is perfect for you.

What Is Blockchain Bitcoin?

With Blockchain bitcoin wallet, you are creating your own bank where you can store your bitcoins at your own risk and responsibility. There are no third-parties who will own your bitcoins or their private keys. You can buy, sell, exchange, and transact all by yourself whenever you want. There are no hidden terms and conditions. But if you let out the private key of your bitcoin, it can be stolen immediately as there is no third-party security service. So, basically what Blockchain is providing you is a cloud platform in form of an account where you can store your bitcoins and other cryptocurrencies at your own risk without any responsibility of the company. Even if the company goes bankrupt, your bitcoins will be fully protected as the company has no idea about your private keys. Blockchain.info now has over 20 million wallets and transaction volume has crossed 100 million.

Before going into differences, it is important to understand that both of them have certain risk factors. Just as Coinbase owns your bitcoins when you buy and store them in your Coinbase account and the company can disappear with them, Blockchain bitcoin accounts are completely open and vulnerable due to the absence of regulatory like Coinbase.

Dealings – With Coinbase, you can convert dollars or other supported local currencies into supported cryptocurrency using a bank account, PayPal, or credit cards easily. Blockchain only allows cryptocurrency for all sorts of transactions which is a major drawback. If you are looking to buy and trade in Bitcoin and withdraw the money after some profit, Coinbase is the only option. Furthermore, Blockchain does not support LiteCoin yet as in Coinbase which is an emerging cryptocurrency now.

Suitability – Coinbase is considered to be suitable for beginners in bitcoin because its services and platform are super easy to use and set up. The blockchain is perfect for those who have enough knowledge and experience about bitcoin and can take care of their own security. Coinbase is like PayPal for bitcoin whereas Blockchain is like the physical wallet you have with certain charges for services.

Security – Coinbase has better security measures than Blockchain as Coinbase are fully responsible for your bitcoin where Blockchain is technically not responsible if someone hacks your account and steals your bitcoins. As a matter of fact, Coinbase has insurance policies against your stored digital currencies. There are 2-step verification and multi-signature process for the transactions to take place. Blockchain provides you different resources to build your security fort.

Ease Of Use – There is no doubt that Coinbase has a better platform than Blockchain in terms of user-friendliness. There is the facility for instant transaction and exchange in local currencies and users can make payment through email on Coinbase. Coinbase Bitcoin is readily accepted on various online platforms and you can even hire freelancers and pay them with Coinbase bitcoin on various freelancing platforms. Blockchain bitcoins have fewer acceptance as it is not convertible into local currency.

Charges – Coinbase charges more than Blockchain for their services and there are various terms and conditions in Coinbase whereas Blockchain is an open book.

It is very clear that Coinbase bitcoin is better than Blockchain bitcoin unless you think bitcoin is a bubble ready to burst and Coinbase can disappear with your money.

Next post What are the Big Differences Between Java and JavaScript?

Previous post What Are the Best Business Models for 2018?