Atom vs Sublime vs Visual Studio Code vs Vim – Which is Best Text Editor? 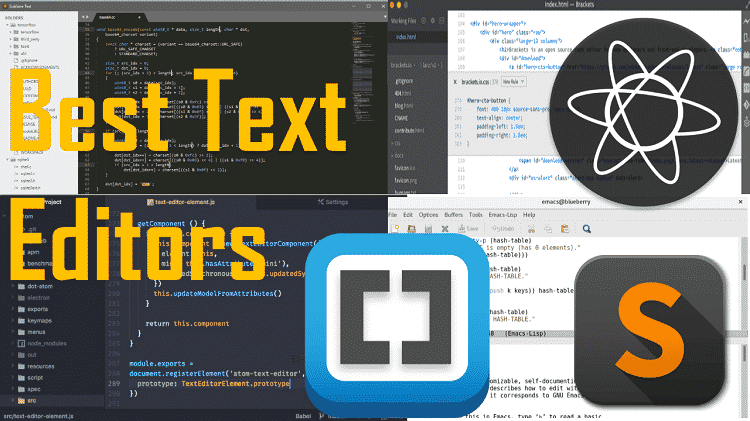 A proper text editor is instrumental in increasing the speed and efficiency of coding. When it comes to the web development, there are various text editors available and many of them are quite popular. If you are a newbie, you can be quite confused which editor to choose as you will come across the names of Atom, Sublime, Visual Studio Code and Vim. Different developers will recommend you different text editors and all in all, these four stand out from the crowd. Before you try out any of these, you should know the pros and cons of each one of that so that you can choose the best one for your requirements.

Atom is a product of Github and it is available for free. It is a relatively new entrant as a text editor but ever since its release, the popularity has been increasing every year. It is compatible with Windows, Linux, and MacOS. The best features that make Atom stand out completely are its advance auto-complete option and its highly intelligent suggestion options. The package manager is quite advanced and all packages are available on Github. The more pre-installed packages present in a text editor, the more developer-friendly it is considered. These are over 7000 packages and themes available on Atom.

Since it is a product of Github, Hit integration is one of the highlights where tree-view is offered for all files, folders, and history. You can drag and drop files conveniently and most importantly, the editor itself is customizable and you can set it up to increase your productivity just like the way you want it to be. The indentation for different web languages makes the code readable to the maximum extent. The only drawback reported by various users is its slow performance in handling large files.

Verdict – For small and medium-sized web development, Atom is a treat for developers.

Sublime is one of the oldest yet popular text editors of them all. Developers find it difficult to make a transition from Sublime to others as they have got used to it and somewhat addicted. It costs around $70 and developed by a former Google Engineer. It works on all platforms and it has already been a decade since its first release. Sublime has a great collection of packages by its lacks the pre-installed part that Atom comes with. So, the users have to install everything manually to get started and available different features. The Github plugin is not up to the mark and the integration is never as per the standard set by Atom.

On the customization parameter, it is as good as Atom and there are various themes available. When it comes to performance, it outperforms other text editors clearly due to its smooth operation. It is one of the most reliable text editors of them all as once you set everything up, you do not have to worry about anything else and you can devote your full attention to coding only. But its auto-complete feature needs massive improvement. If performance is the only thing you care about a text editor, Sublime is for you.

Verdict – If you are using Sublime, you should look for an alternative as it lacks a lot of essential features.

Visual Studio Code is extremely popular as it is a product from Microsoft and it is available for free. Surprising, it works for both Linux and MacOs apart from Windows. VS Code is relatively the newest member in the text editor and it was released in 2015. The plugin ecosystem is robust and many of the extensions are pre-installed. There are various advanced plugins available exclusive for web developers to make simple plain and simple for all the web technologies. It is often compared with Atom but it surpasses Atom with its speed and performance.

The auto-complete feature and super intelligent suggestions are unmatched. The look is customization and can be made professional as well as casual. The debugger is a stand out feature that most of the text editors can never match. Most importantly, the Git integration is as good as Atom.

Verdict – If you are familiar with Microsoft’s programming products, you will definitely enjoy working in VS code.

Vim is available for free and it works on all platforms. Vim is designed for commercial work as there is a feature of remote server viewing through a terminal provided. Vim is considered to be an advanced text editor and it is really powerful but one has to spend enough time to learn its powerful features and use them effectively in daily coding. Its performance is superfast and highly efficient if you know how to extract the best out of it. There are various shortcuts available that one has to learn to increase productivity like never before. There are packages for everything but one has to know the exact package name to get the desired feature.

The customization sucks as it is more like a command line text editor. Everything has to be controlled by keyboard shortcut. But there are various preconfigured Vim files available for customization. It is a true example of a raw editor.

Verdict – If you want advanced features and have enough time to learn a text editor, Vim is tailor-made for you.

If you are an old school web developer, you should opt for Vim and devote enough time to learn its usage. Sublime does not stand a chance for a recommendation and you have to choose between Atom and VS Code as per your convenience by giving both of them a separate try out. Atom is not great for large-scale development while VS code is suitable for any size of development.