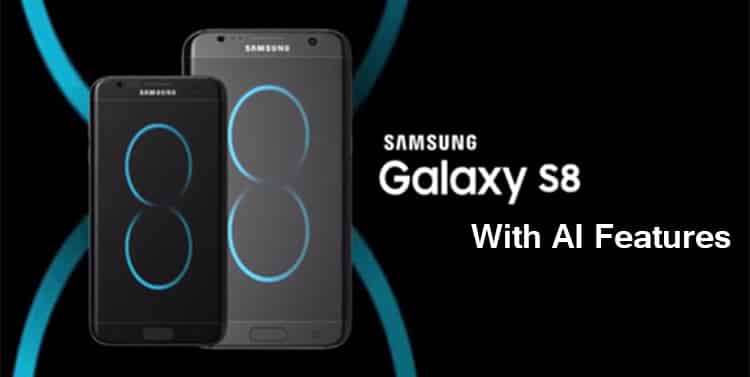 The new Samsung Galaxy S8 features will center on increasing security, improving speed and making both the S8 and S8 Edge more functional. IT seems Samsung (Sammy) will be improving the eye scanner. The more responsive retina eye scanner in both new Galaxy models will take less time to register. With the latest advanced games on smartphones, it is obvious that the market has very high demands from the Mobile Manufacturers also.

The speed, processing power, memory, and camera power are obviously increasing in most of the devices, but the major players are focusing on very high-tech features. One of the best additions will be a new, unique glass-like surround. We’re hearing rumours of a much more durable surround that will hold up much better than the current model. The latest features are going to include the dual camera, water resistant and much more. The features are of real interest to freelance gigs working in Android App development.

All new feature of Artificial Intelligence:

Samsung, for its part, is expected to launch the Galaxy S8 in the coming months alongside an artificial intelligence (AI) assistant code-named Bixby. According to more recent reports, Bixby’s processing will power image analysis and object identification. It will allow Galaxy S8 to identify the objects (where you point the phone) and will direct you to online retailers for you to buy the item. The search functionality is likely to be tied with Samsung Pay.

Apple is developing a new feature named an ‘enhanced Siri’ via its acquisition of machine learning and AI Startup Turi. The hardware voice assistant, which reportedly features a microphone and speaker array should play music, control smart-home devices compatible with their own HomeKit platform. It is also supposed to set reminders and alarms. Huawei, a big player in the mobile market, is prepping an expansion of its third- and first-party AI efforts.

Android Auto is expected to become standard features in many future cars and trucks which would give consumers the ability to access music playlists, apps, etc. from your phone directly on the display of your car. Android Pay is also starting to take-off along with Samsung Pay. The mobile phones and Apps together are covering the entire internet spectrum, and we are going to see one major step with new Galaxy.

The S series has become one of the most respected smartphone models which have become the essence of what consumers want to see, and what we all have come to rely on in this mobile era of technology. The Galaxy S8 will deliver superior durability, amazing visual appeal, enhanced functionality, high-quality visuals and unique productivity.

The Samsung Galaxy S8 Edge will bring back the curved appeal that will help to differentiate it as one of the most functional smartphone concepts. You will see a faster processor, more durable glass surround, and more functionality with peripherals. With rumours of a 4K display, enhanced Android Pay interface, eye sensing technology, Foldable dual screen and a better functionality between phone and auto.

Some of the biggest improvements in the specs for both include at least 30 megapixels seen on the rear camera, dual micro SD card slots, enhanced body metric sensors, and much more. The freelance web developers and App developers should be happy to see the interface improved to implement the latest features using the phone capabilities.

The new S8 features will focus more on security while improving speed, productivity, and making both the S8 and S8 Edge more functional. You must have heard about the eye sensing technology for quite some time, and it seems that Sammy will be improving the eye scanner. The retina eye scanner in both these models will be more responsive and should take lesser time to register.

Android Pay is also getting popularity with Samsung Pay. It gives you an ability to conveniently and safely checkout at many worldwide retailers. The speed will rival that of any new 2017 smartphone and has many other features like more camera features, improved visual display, increased security features, and a better interface multiple Apps. Apple pioneered Apple Pay, but both Samsung and Google are taking major steps in this field, and this will be seen once again with the newest flagships.

The durable glass-like surround and will significantly improve the durability of the screen and outer surround. You will see a new, premium glass outer body that will encase both the front and back of both S8 versions.

Samsung is known to listen to customer demands and market expectations and bring those features in their upcoming models. It leads to one of the latest rumours on the new Samsung Galaxy S8 concept that just may feature a truly foldable design. The freelance designer community will have some good learning from the new features.

With AI being the future, Samsung will try and make sure that its flagship has something special to offer as well and Viv could well be this catch. It is expected to be much better than the S-Voice did in the past. The rumours of a super-smart AI system packed within the Samsung Galaxy S8 are there from last year after the company announced the acquisition of the Viv Labs. The new phones from Samsung are likely to see the AI features developed by the Viv labs.

A new era for Android Phones:

Now, it seems that the new assistant, named Bixby, is almost certain to appear on the new device. Bixby is likely to use the cameras on the Samsung Galaxy S8 to scan your surroundings, surfacing useful information.  It is likely to be a start of all new AI features on Android phones! It will be interesting to see what all new features you will see when the phone launches in April’17.

Next post Why Startup Looks into IoT (Internet of Things) Space

Previous post Everything to Know About Game Developers Conference 2017