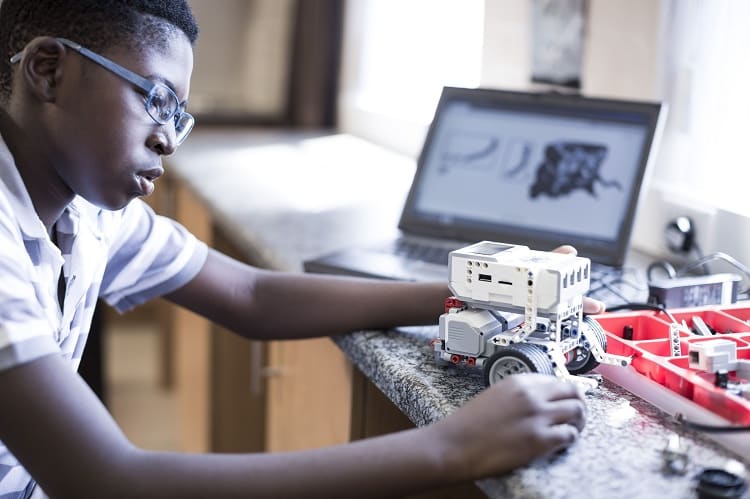 Robotics is one of the trends in 2018 and people are curious to know which programming languages are used for robotics such they can learn them and look for easy jobs in robotics companies. Robotics is a perfect blending of electronics, computer science, artificial intelligence, machine learning, instrumentation, and mathematics. You will need to have enough understanding of these fields to be a good programmer. There are unlimited freelance jobs on robotics as the field is diverse and caters to different skill sets of programmers.

Which Are The Commonly Used Programming Languages?

Java – Even though the popularity of JAVA is slightly going down annually due to the rise of new programming languages such as Python, but the demand of Java programmers is intact. Robotics companies hire freelancers with core skills in Java and there are many Robotics certification courses available in Java. Java has all the high-level features needed in robotics industry especially when it comes to artificial intelligence. You can create highly efficient algorithms for machine learning, search and neural algorithms, language processing and much more.

Python – Python is one of the most popular programming languages that have emerged in the last few years and taking over the established programming languages rapidly. It is a high-level programming language which means you have to write fewer lines of codes than those in C, C++, and Java. Python is used in robotics especially in designing embedded system. It is being used in the electronic industry and recommended by electronic giants like Raspberry Pi and Arduino. Python is highly instrumental in the development of automation and machine learning gadgets. It is an integral part of Robot operating system.

MATLAB – Technically speaking, MATLAB is not a programming language but it is a tool with which you can find engineering solutions based on mathematics. It is a simulation tool whereby you provide your algorithm or design and it simulates the result. It is highly useful in designing the entire robotic system and once the results are found out to be consistent and stable, the development and manufacturing of the robots start. MATLAB is widely used in the robotics industry as it is deeply rooted in the foundation and development of robots. But MATLAB does not have direct application in the robotics industry because every company has their own simulation system like MATLAB. Hence, the knowledge of MATLAB is essential.

.Net with C# – Microsoft has its proprietary Robotics Developer Studio which is why .Net with C# is on the rise in the robotics industry. It is generally used in port and socket level programming. It is especially important when the robot is going to be a part of the Internet of Things(IoT). You may not get unlimited freelance jobs with this programming language because it constitutes only a certain part of robotics development which can also be developed using other languages.

Which Is The Best One Among Them?

But more than C, C++ is widely used in robotics companies due to the availability of more tools and library functions. Furthermore, the programming can be fully organized for complex activities. C++ needs less execution time and it is the backbone of artificial intelligent in the industry. Most of the complex and advanced AI-based robots used C++ over Java and Python as the language is develop-friendly. Developers can analyze minutely and change things line by line but in advanced high-level languages like Java and Python, the readymade functions make it difficult for developers to modify as per requirement.

Therefore, learn ROBOTC and core C++ that focus on robotics functionality to maximize your future prospects.

Previous post How to Add AI to Your Mobile App