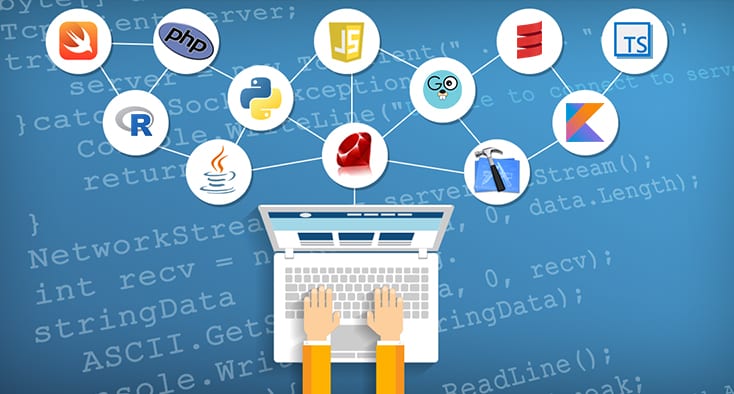 JavaScript – It is the most demanding programming language in 2018, and with every passing year, its demand is growing consistently. It is indispensable for front-end design of web applications. In fact, it is expanding its reach in the back-end as well. Therefore, you must learn and master this programming language with all its frameworks to land a grand job.

Python – Among the backend programming language, Python’s popularity is rising exponentially. Therefore, new programmers prefer to learn Python more than Java even though the job demand for Java is more than Python. Python is the future as it finds application in machine learning and artificial intelligent both of which are buzzing right now. Apart from those, it is also useful in IoT, data science, game development, and various such important sectors. The pay for Python developers is higher than most other popular languages.

Java – Java is still one of the most demanding programming languages. In fact, the new programmers omitting C and C++ now and learn Java straight away. Therefore, it has become a preliminary programming language that you must know. There are robust frameworks available like Spring, Struts, Hibernate which are being used in the industry for various types of software application development. Moreover, Java is must for developing Android apps which is now an essential thing for companies.

Apart from these, if you want to be a developer for Apple products, Swift is essential. PHP is also very popular in the web development world along with JavaScript.

The New Ones To Watch Out –

Ruby – Due to the rise of Python, the popularity of Ruby has been masked. But, in the corporate world, there is an equal demand for Ruby as Python. You will find various heavy web applications making transitions from PHP, Java and other to Ruby as much as they are for Python. If you want a high-paying job in future, Ruby is a must learn and Ruby is closely associated with Rails which is a framework. If you want to learn something different from the rest, Ruby on Rails should be at the top of your list.

Go – When Google builds something, and it gets popular, you know it is going to be a blockbuster. There are many who believe that after Java and Python, Go will be the go-to language in the programming world. The current year has elevated its use and the next year is likely to be the breakout year for the programming language. In fact, Google may make a transition to GO for many of their products and hence, the popularity and application of the programming language will be widespread in the coming year.

CoffeeScript – There are many experts who feel like CoffeeScript has the potential to replace JavaScript in the future especially after seeing its exponential rise. It overcomes the shortcoming of JavaScript completely, and programming on it is a treat. That is why new programming language learners prefer CoffeeScript over JavaScript, and the trend is going to continue. Along with that, you should learn TypeScript as they are related. CoffeeScript has the potential though it remains to be seen in the next year whether the popularity expands at the same rate or not.

Apart from these, you should know the name of the potential programming languages that will breakout in 2019 and they are Rust, Elixr, Kotlin, Elm and Crystal. Do remember these name because, by this time next year, you are going to hear about them a lot.

Previous post What is the Difference Between API and REST API