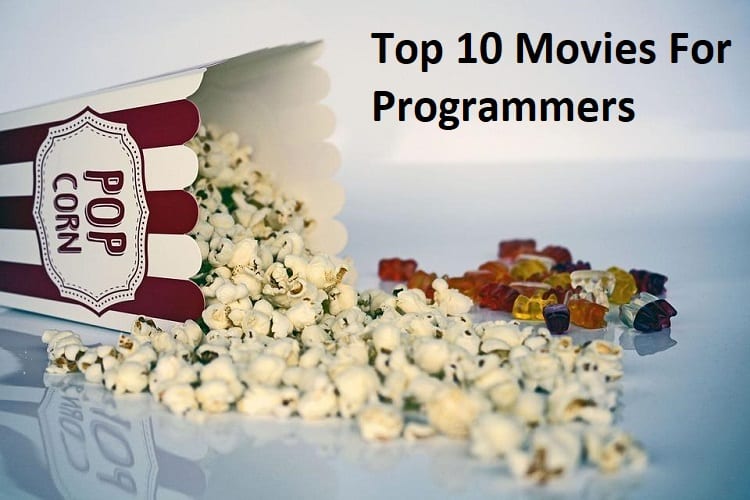 Looking at your profession from an outside perspective always feels great. That is why the programmers love movies that are related to programming in some ways. Besides, you love watching movies rather than playing games to cut their stress off when they are not programming. The following the list of the top 10 movies for programmers like you if you still have not watched them.

This is the most liked movies among programmers across the world. The movie is based on the life and growth of Mark Zuckerberg, the founder of Facebook. The movie shows his journey from being a nobody to creating Facebook. Unlike other movies based on the life of popular computer personalities, this movie has soon a lot of details in coding from Mark which is very realistic and therefore, like a lot by programmers.

This is a movie made on the life of Steve Jobs who is like an idol to all those programmers who aspire to be a successful entrepreneur someday. There is not much of coding scene, but the growth of Steve Jobs is so beautifully illustrated on the screen that programmers will fall in love with it. It shows how the programming industry work from inside and the screenplay and dialogs are out of the world. Along with this, you can watch the movie Jobs made in 2013.

The movie shows the life of computer hacker Kevin Mitnick who has the topmost notorious hacker of his time. There is a wild fascination among programmers to watch movies that have hackers activities involved. Along with it, you can watch the movie Hackers that came out in 1995.

This is a movie from nearly three and a half decades ago, yet the storyline is so compelling that the modern age programmers cannot help but love and appreciate the movie. It is the story of a kid hacker and how the brains of young hackers work as if hacking is a game and then they face the after effects. This is a great movie for the programmers who are parents to kids to watch out their activities on the internet.

The movie is based on the story of Aaron Swartz, and it is a critically acclaimed thriller. Aaron Swartz took his own life at the early age of 26, and it is an eye-opener for many programmers who take too much stress in their professional life and how dark the internet can be that can trap your talent.

Even though it is almost two decades ago, the movie is still one of the most loved movies by the young programmers. It shows a group of young idealist programmers and how a large company offers them good money and a working environment to make the best use of creative opportunities. Then a young programmer discovers some hidden truth about the corporation, and it is a roller coaster.

It is a biographical thriller that shows the incidents which gave rise to WikiLeaks. Various controversies were portrayed, the misuse of internet platforms and programming possibilities have been highlighted. The movie is truly inspiring, and it shows the power of the programmers in this world, and it depends on them how they can shape the world in a good or bad way. How it all worked anonymously is well portrayed, and you cannot afford to miss it.

If you are looking for something to have fun and yet related to programming and software world, this is the one for you. It is a comedy movie, and it shows the work of a typical software company back in the 90s. Even though the movie did not do great in the box office, it managed to win the hearts of the programmers.

This is an American historical drama movie that illustrates the life of Alan Turing who is the main pillar behind the existence of computer and programming for that matter. It shows the invention of the world’s first computer in details. The struggle of Alan Turing and his genius abilities are perfectly portrayed, and it also showcased the decoding of German Enigma code during the World War. This is a must watched even though we listed it the last.

Take your time out on the weekends and clear your head completely before watching the movies with full attention. We can guarantee that you are going to watch a most of these movies multiple times as they are that great.

Next post What is the Difference Between NumPy and SciPy