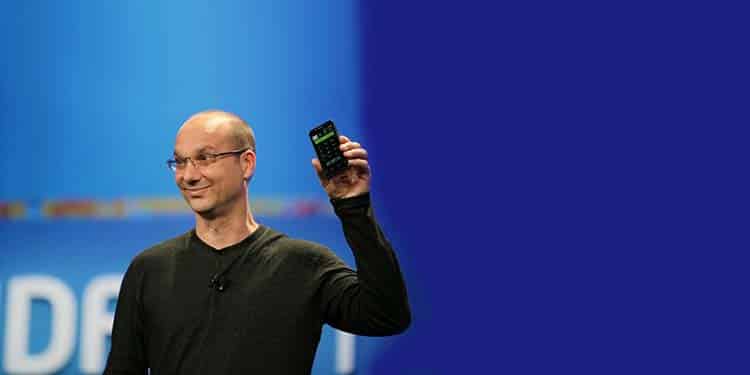 The man behind the Android OS, Android co-founder Andy Rubin have announced that his new company Essential is working on a new smartphone. The teaser ad is available, but exact specifications are not known for this smartphone yet.

The initial glimpse shows it as an end to end screen large smartphone, which looks exciting. The new spread from the viral platform Twitter where Andrew shared a picture with a caption mentioning that he is excited about how the device is shaping up. He added that he is eager to give it in the hands of users as soon as possible.

It seems the phone is running Android OS and will have a separate power switch. When the sneak peaks are available, there are many rumours and can’t be confirmed with anyone at this stage whether these are rumours or reality.

The new bezel-less display like Xiaomi’s Mi MIX smartphone can come as a prime attraction. The same is likely to be there with Apple iPhone 8 and Samsung Galaxy S8. You can read more about both devices on this blog in separate articles. With competition from Apple and Samsung, Essential might have to bring its device to the market soon enough to capitalise on the particular display feature.

Andrew E. “Andy” Rubin is an American computer programmer, engineer, entrepreneur, and venture capitalist. He is the founder and CEO of Tech Startup incubator Playground Global and a partner at venture capital firm Redpoint Ventures. He is the co-founder and former CEO of both Danger Inc. and Android Inc.

After Android’s acquisition by Google in 2005, Rubin became Google’s Senior VP of Mobile and Digital Content. He was heading the Android development. He has seventeen patents on his name for various inventions.

Sometime in 2013, Andy moved from the Android division to take on new projects at Google. That time he was replaced by Sundar Pichai, who is now Google’s CEO. By the end of 2013, Andy started managing the robotics division of Google. In October 2014, Andy left Google after nine years at the company to start an incubator for hardware Startups. After that, there was a bit of silence, and now he is revealing about his new venture and new developments.

Andy Rubin, the inventor of Android, has teased a new smartphone manufactured by his company. He has shared the image of the mysterious looking device, and we can only see a certain corner of the phone. The network, battery and time are the only things visible in a white text, on the screen of the device.

His company is known for making electronics gadgets like smartphones and tablets along with the mobile software. Earlier, according to the Bloomberg report, Rubin’s new company called Essentials has a focus on making AI-centered products, including smartphones and other smart devices. Even his previous Startup Playground Global is a famous AI Startup incubator. The report said that the plan was to launch a premium smartphone with an edge-to-edge screen and set the price same as the iPhone 7. The proposed smartphone may not be a cheap phone as it will compete with latest versions of Apple iPhone and Google Pixel.

Playground Global is a tech incubator that provides resources, mentorship and funding to Startups making hardware devices, specifically to help make advances in Artificial Intelligence. The founders of this company were Andy Rubin, Peter Barrett, Matt Hershenson, and Bruce Leak. With these ventures and vast experience, the market is expecting a high-end smartphone with Android, some unique features, and AI capabilities.

Essential is likely to be focusing on high-end devices that it has reportedly raised a significant amount of funding to create. There is no word on when exactly we can expect to see a device come forward, but after nearly a decade of companies releasing phones they claim to be “iPhone killers,” we can expect it to be an early release with some cool and technically advanced features. The freelance web developer community is an advantage as well as they have too much to digest because of the new mobiles and new software systems.

Rumours and Guess since Jan’17:

The speculations were there since Jan’17, and freelance websites mentioned that time: If you’re familiar with the history of Android and Google, you likely have heard about Andy Rubin. He co-founded Android, Inc. Google acquired this company in the year 2005. Andy continued to work at Google until 2014. Bloomberg reports that Rubin is ready to announce a new consumer hardware company, named ‘Essential,’ with the first product being a bezel-less smartphone.xiaomi. With so much of hype, Essential future products will also have a good base created for their new company. You can expect a new nice product from this company.

But having no bezels likely won’t be the phone’s only trick. We heard that a unique connector that allows for charging the device and attaching hardware accessories is under development. One of the reports claims of an add-on of a sphere-shaped camera capable of taking 360-degree pictures.

The version of Android is again important. The latest version is Android 7 Nougat, which will be available for multiple devices shortly. Current Marshmallow version is 6.x. The Lollipop is at 5.x, and the KitKat is at 4.4.x. The old versions 4.3, 4.2 and 4.1 all are now coming under the codename Jelly Bean. We need to wait and see which one Ruben will use or will he use some other OS?

So, yes, with only a glimpse of the new device and some speculations, most people are talking about the features of Andy Rubin’s new smartphone. In reality, we have to wait for Andy or someone from Essential to provide more details on features/specifications. The competition in 2017 for mobile phones is fierce, and there is going to be a neck-to-neck competition between these devices with a lot of advantages to users. We will keep updating this blog with new posts as more information becomes available about the new devices, technologies, programming languages, operating systems and different software tools.

Next post Retrofit, an HTTP Client for Android and Java: What You Need to Know