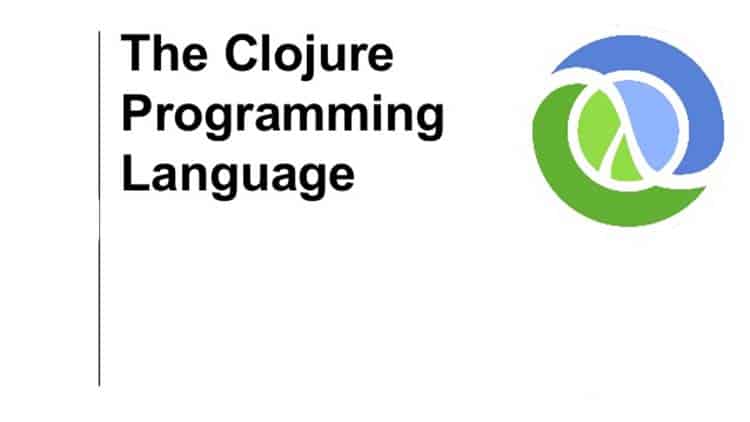 We introduced you to multiple general purpose programming languages through this blog. This time, we are introducing you to one more such language known as Clojure. It combines the approachability and interactive development of a scripting language with an efficient multithreaded programming. It is a compiled language, yet remains completely dynamic and the language supports every feature at runtime. Through this language, you get access to the Java frameworks, with optional type hints and type inference.

Lisp and Creator of the Language

The language is a variant of Lisp, and the creator of language is also same as the creator of Lisp; Rich Hickey. It shares with Lisp the code-as-data philosophy and a powerful macro system. It is a feature rich functional programming language and has a rich set of immutable, persistent data structures.

The programs run on the Java virtual machine, Common Language Runtime, and JavaScript engines. Similar to other Lisps, Clojure treats code as data and has a macro system. The current open source development is community-driven, guided by Rich Hickey.

It is related to immutability and immutable data structures. While its type system is entirely dynamic, recent efforts have also sought the implementation of gradual typing. The language helps programmers to be explicit about managing state and identity. This focus on programming with immutable values and explicit progression-of-time constructs is planned to facilitate developing more robust programs, especially multithreaded ones.

Clojure is in use by firms such as Funding Circle, Walmart, Puppet Labs, and other large software firms. Cognitect provides Commercial support for Clojure. Annual Clojure conferences are organised every year across the globe.

The stable version of Clojure is 1.8 which is a Jan’16 release. The first stable release was in May 2009. As discussed earlier, it is an open source free software released under the Eclipse Public License.

Clojure is a dynamic environment for your interaction. All of its language constructs can be examined and changed. It also means you can grow your program, with data loaded, adding features, fixing bugs, testing while you are developing new features and functions.

This language provides the tools to avoid mutable state, provides functions as first-class objects. It is impure, but has a philosophy that programs that are more functional are more robust.

Clojure is a member of the Lisp family of languages. As you can see, many Lisp features are available in other languages, but Lisp’s approach to code-as-data and its macro system still set it apart. Clojure’s maps, sets, and vectors are as the first class in Clojure as lists are in Lisp.

Clojure simplifies multi-threaded programming in several ways. As the core data structures are immutable, they can be shared readily between threads. Clojure, being a practical language, allows the state to change but provides a mechanism to ensure that, when it does so, it remains consistent, while making it easy for freelance web developers.

Hosted on the JVM

Clojure is designed to be a hosted language, sharing the JVM type system, GC, threads, etc. All functions get compiled to JVM bytecode. This language is a great consumer of Java library, offering the dot-target-member notation for calls to Java. Clojure supports the dynamic implementation of Java interfaces and classes.

AS the language runs on the JVM, it integrates with Java and fully supports calling Java code from Clojure, and you can call the code for this language from Java also. The community uses Leiningen for project automation, providing support for Maven integration, which handles project package management and dependencies.

Like most other Lisps, Clojure’s syntax base is S-expressions, which are first parsed into data structures by a reader before being compiled. The reader of this language supports literal syntax for maps, sets, and vectors along with lists, and these are compiled to the mentioned structures directly. Clojure is nothing but the first version of Lisp developed by its creator and is not compatible with all other dialects of Lisp since it uses its set of data structures incompatible with other Lisps.

As a Lisp dialect, Clojure supports functions as first-class objects, a read, evaluate and print loop, and a macro system. Clojure’s macro system is very similar to that in Common Lisp with the exception that Clojure’s version of the backquote qualifies symbols with their namespace. It helps prevent unintended name capture, as binding to namespace-qualified names is forbidden.

It does not allow user specific macros, but the reader supports a more constrained form of syntactic extension. Clojure supports multimethod, and for interface-like abstractions, it has a protocol based polymorphism and data type system using records. It provides high-performance and polymorphism designed to avoid the expression problem.

Clojure has support for the lazy sequences and allows the principle of immutability and persistent data structures. As a functional language, the emphasis is on recursion and higher-order functions instead of side-effect-based looping. For parallel and concurrent programming, this language has features of software transactional memory, a reactive agent system, and concurrent programming. Only freelance tips can get you such information.

Clojure introduced recently some reader conditionals of Clojure and ClojureScript code in the same namespace. The Transducers enable higher-order functions like map and fold to generalise over any source of input, as normally these functions operate on sequences, transducers allow them to work on channels and let the user define their models for transduction.

Clojure is a homoiconic language, which is a term describing the fact that Clojure programs are represented by the language specific data structures. It is another advantage for candidates accepting freelance work. It is a very important difference between Clojure and most other programming languages – Clojure is defined regarding the evaluation of data structures and not regarding the syntax of character streams. It is quite common, and easy, for Clojure programs to manipulate, transform and produce other Clojure programs.