The Quixote Web Framework: What You Need to Know 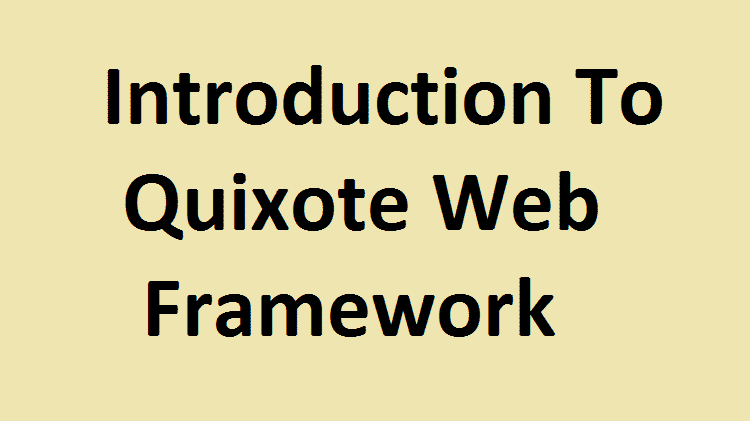 Quixote is a web framework designed to write web applications using Python. Python itself is a high-level programming language and you have to write less code if you compare it to other popular programming languages like C++ and native Java. The web framework makes it even easier to develop web applications that can be highly flexible and provide robust performance. You can develop a web application in a more organized and structured way and therefore, the development will be faster and more and more third-party Python modules can be incorporated without making a mess. Technically speaking, a web application developed in Quixote is nothing but a Python package having different modules inside a folder. A URL is mapped inside any function inside that Python package and the function is called as HTTP requests and the result is shown to the client.

As Quixote web framework is based on Python, it is primarily developed for all those Python developers who are into developing dynamic websites. They can use their existing Python knowledge to develop an application on the framework. You can start using Quixote web framework with some basic knowledge of Python like importing modules and calling methods. But it must not be confused with other frameworks that have WYSIWYG editor. This is why it is more flexible than most of the web frameworks that exist today. It is not restricting your programming skills to try out creative things.

What Is Quixote Web Framework Best For?

Quixote web framework is a perfect choice for developing dynamic web applications. In particular, if you want to develop web applications with complex programming algorithm, Quixote is a perfect candidate. If you are more concern with the functionality of the application rather than its look, Quixote is for you. Lastly, if you do not want to learn another templating language and use your existing Python knowledge to create robust web sites, Quixote web framework is tailor-made for you.

No Guessing – When it cannot understand what to do due to a loophole in your coding, instead of guessing the intent of the code like other web framework and then creating a complete mess, Quixote silently raises an exception to be handled by the programmer.

Convenience – Since it is a web framework, its main principle is to make it easier for the developer to embed HTML in Python. It is so easy that it is more convenient than embedding Python in HTML.

Publishing Results – The basic logic of Quixote is to use a linked URL to go through a Python function or method and produce the result to the client or web. There is no extra model or infrastructure and it is this simplicity that helps in faster development.

The Logical Steps To Write An Application In Quixote-

As stated earlier, a Quixote application is nothing but a collection of Python classes inside a Python package. Each class is meant to execute the fundamental logics of the application. It is important to note that these classes have nothing to do with the user interface and its different types. Therefore, the classes are independent of your design section. You have to design the user interface in a separate PTL module. Then you have to link the web interface with the classes in a one-way interaction whereby the web interface will import the classes and not vice versa.

The Working Of Quixote Web Framework In The Background –

When a user performs an action on the web application interface you designed, the browser sends a request to a particular URI from the server side which can be an Apache server. Since the server is unaware of Quixote web framework, it translates the URI into a path and invokes the CGI script. The CGI script creates an instance of the specific class to Quixote and Quixote then invokes the function and instances of related classes are created. These instances link the modules in existence and finally, Quixote invokes the class that creates HTML to be displayed to the user. Apache then sends the HTML to be displayed to the browser from where the request originated.

Some Concepts Of Quixote Web Framework You Should Know About –

Widget Classes – These are non-abstract classes for designing HTML elements. The widgets classes are also used to analyze the result based on user’s input. It can return an error string, title string or hint string.

Form Classes – These another set of non-abstract classes for designing HTML forms. There are various methods and corresponding parameters available to take input from the users and performing various operations in the background

PTL – Python templating language is designed to prepare HTML pages. A template engine lets you use static files in your application. Even though it is saved as a Python file, during runtime, it is converted into an HTML file to display the output to the users.

Previous post What is the Best Framework for C++ Programming?