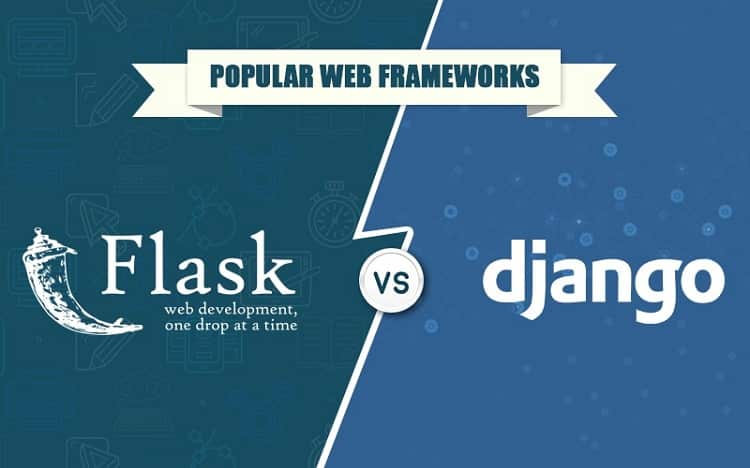 There are literally endless web frameworks available for Python. If you are starting to learn Python, you are sure to be overwhelmed and confused as to which one you should choose. You have the choice to choose the most popular one for your project development or you can try other frameworks to choose the one that is best suited for your project. Some of the popular web frameworks for Python are Django, Flask, Diesel, Falcon, Tornado, and much more. Flask and Django are the most popular ones and the following guide will help you to choose between the two.

Differences Between Django and Flask –

Before going deep into the differences, it is important to understand that Django is a major framework while Flask is more like a micro-framework in relative comparison. In technical terms, Django is a full-stack web framework and it has in-built features that make authentication, routing, schema and various such important tasks super easy. Flash is a minimalist web framework and some of the default features of Django are absent in Flash. Yet, it can help a developer develop the core of a project in simple steps.

Verdict – If you are looking for a rich template engine, Django scores here.

Both the frameworks have a distinctive approach for project layout. In Django, a project can be divided into multiple applications. But in Flash, one project is considered as one entire application. For a professional web development, it is important to divide a project into multiple applications so that different teams or individuals can develop and later integrate. Therefore, Flask is essentially for one team to work on one project. This makes it inconvenient for large projects.

Verdict – Django is best for large projects, Flask is for small ones.

Since Django is a full-stack Python web frame, there are more inbuilt libraries and tools available. There is no need for inclusion of third-party tools. But in spite of being an open source web framework, the framework lacks the ability to provide the developers a platform for editing the tools and libraries and make them as per their requirement. That is where Flask scores over Django by allowing developers to do anything and everything with inbuilt libraries as well as third-party tools. This is one of the main reasons why some developers think of Flask first to find out the suitability of executing a project and consider Django later.

Verdict – Flask offers more flexibility to the developers than Django.

There is no doubt in admitting that the admin panel of Django is far better and advanced than Flask. The admin panel of Flask is simple, intuitive, super easy for development purpose but the one Django is having, it offers more features for easy management of the entire project, its applications, functions of each application and user management. On the other hand, Flask is easy to learn and grasp as it leaves most of the features to add-ons and developer. Django’s battery approach takes time to master. Flask is focused on providing flexibility while Django is focused on providing all-inclusive experience to the developers.

There are certain extra tools available in Django which are highly required for easy development. Django has an inbuilt bootstrapping tool called Django Admin. This is the tool that helps the developers to divide a project into multiple applications. The developers can start a project from scratch without any external help. They can add more features and functionalities of individual applications of a project in case the client asks for more.

There is no doubt in saying that Django is the most popular web framework. There are many popular and high-traffic websites on the internet that are built in Django. Django is ideal for developing complex web applications but for faster development, one has to prefer Flash over Django. Django is best for websites with more dynamic content and functionalities while Flash is more preferred for the websites with more static features than dynamic functionalities.

Next post Heroku vs. Amazon Web Services - Which Cloud Platform to Choose