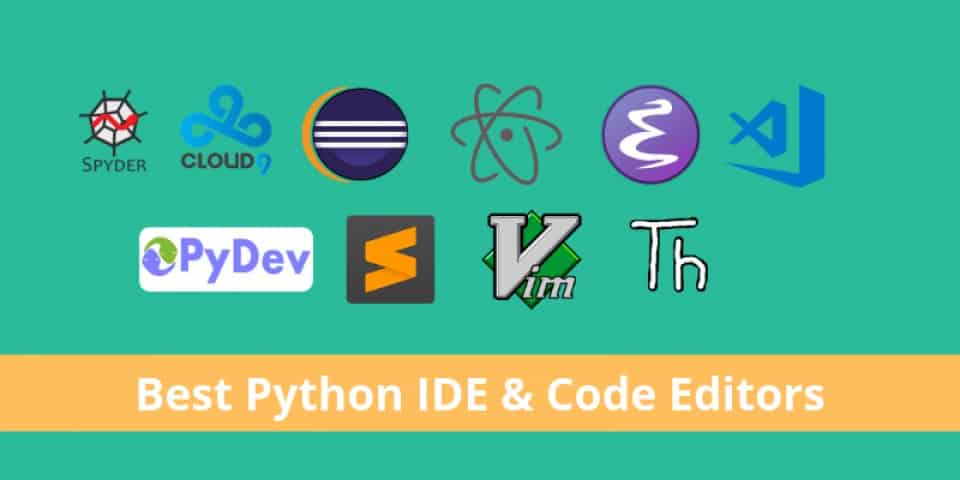 Are you all set to play with Python? The Python IDE is mainly the initial most things that you should get started with the python programming. Moreover, various IDEs are available there in the wild and choosing them may also be a quite daunting task. You may also get started with the Python programming in a basic text editor such as notepad or select to go ahead with the complete and also feature-rich Python IDE such as PyCharm, Emacs, Eric or Pydev.

The selection of the right editor may certainly influence the effectiveness and productivity of Python programming. Professional programmers always invest a lot of time well in advance and they also go for IDE which best meets the entire requirements. The question here is which the Top 10 Best Python IDEs for Windows and which one you should select? It is something which you need to decide and it completely depends on what you need, like and what you can afford. You may also need to try some of them before narrowing down to the final one.

Usually, the IDEs are supported on various platforms that include Mac, Windows, and Linux and they are accessible free of price. If you are planning to learn the game of Python, you can try the IDE’s which are available freely such as Pydev with Eclipse, PTVS, VIM or IEP, Emacs.

What Is an IDE or Integrated Development Environment?

IDE is the software package that contains various tools for developing as well as for testing the software. The software developer all through the lifecycle of Software Development has to use various tools like editors, libraries, compiling as well as testing tools. The IDE assists the developer through automating the entire process. IDEs integrate various tools that are designed especially for the SDLC. It would certainly reduce the manual work by getting different tools in a common and single framework. In case there is not an IDE, the developer should manually take care of the complete process of the Software Development Lifecycle. In the actual sense, the IDEs were introduced to reduce the errors of typing and coding.

If you just wish to play around with the python or run as well as test a few of the python code, so online Python IDE will also do the job for you. Python is the famous programming language that was developed in the year 1991. Python as the programming language it is mainly used for software development, the server-side for web development, scripting, and artificial intelligence. The benefits of Python are that it also works on different platforms like Linux, Mac, Windows, Pi and also Raspberry. Initially, let’s now clearly understand about IDE before going ahead to understand the Top 10 Best Python IDEs for Windows.

It was developed by ActiveState, and it is a crucial part of Open Komodo. This is a cross-platform IDE, where you may use the IDE to code different languages that consist of Python, it’s also paid program, but it provides a free version of open-source known as Komodo Edit. Various educational institutes use it extensively, and they offer this program at much-discounted rates as well. It even works with JavaScript, PHP, NodeJS, Ruby, Perl, XML and HTML. You may also use this program on Mac and Linux.

Eclipse is known to be the versatile IDE that has been around for a quite long time. This is the time tested providing and it is quite solid all around. Moreover, Eclipse is the sandbox IDE; it may also give the boost to language until anyone has also baked in support through the package. This is a case with PyDev, a package that permits you to flip Eclipse in the handy Python IDE.

This is Best IDE for the Python or the Commercial Version. Here, PyCharm is a complete-featured IDE for the Python from the house of the company such as JetBrains. Here, JetBrains is making the best tools for the developer for the previous 15 years intending to make development enjoyable and easy.

PyCharm is the professional Python IDE that is available in two flavors such as Free community Edition and enhanced professional edition which targets the enterprise developers. Also, the popularity of the PyCharm may be gauged from the fact that huge brands have even used the PyCharm Python IDE.

It is the much-enhanced text editors and it is quite popular among the community of the Python developers. This is open-source and it is available completely free of cost under the license of GPL. Vim is known as the editor but it provides nothing less than complete-featured development of Python environment while configured recently for the Python development. Moreover, VIM is quite a much lightweight, fast and modular and it is perfectly suitable for the programmers who love the keyboards and just the keyboards, no mouse should be used while coding.

The Wing IDE is some other commercial Python IDE from the house of the company known as wing were and also it targets professional developers. Moreover, Wing IDE was introduced 15 years back and it is quite a mature product and it also offers a modern set of features and tools that are required for programming of Python.

Spyder Python is the open-source of IDE for Python, perfectly suited for the development of scientific python. It is lightweight software that is written in Python and it is available as free under the MIT license. The key features of Spyder python are an interactive console, multi-language editor, variable explorer, documentation viewer, files explorer, etc.

Komodo IDE is the cross-platform IDE that supports various languages such as Python. It is the commercial product offering the open-source and free version that can be installed on Linux, Mac, and Windows.

PTVS means “Python Tools for Visual Studio” it helps to transform the Visual Studio in the most powerful feature that is rich Python IDE. Also, PTVS is the most recent entrant of Python IDEs and it was also released in 2015.

However, Eric is another open-source of Python Editor and where IDE which comes packed with wonderful features needs for effective programming. This is also written in Python and it is also based on the GUI toolkit which also integrates the most powerful control of Scintilla editor.

The Sublime Text 3 is the most powerful and wonderful cross-platform which has lightweight code editors. With the use of the plugins, Sublime Text 3 may also be used as a complete-featured IDE –Sublime Python IDE. You may also get the elegance of the sublime text with powers of Python for creating own magic.